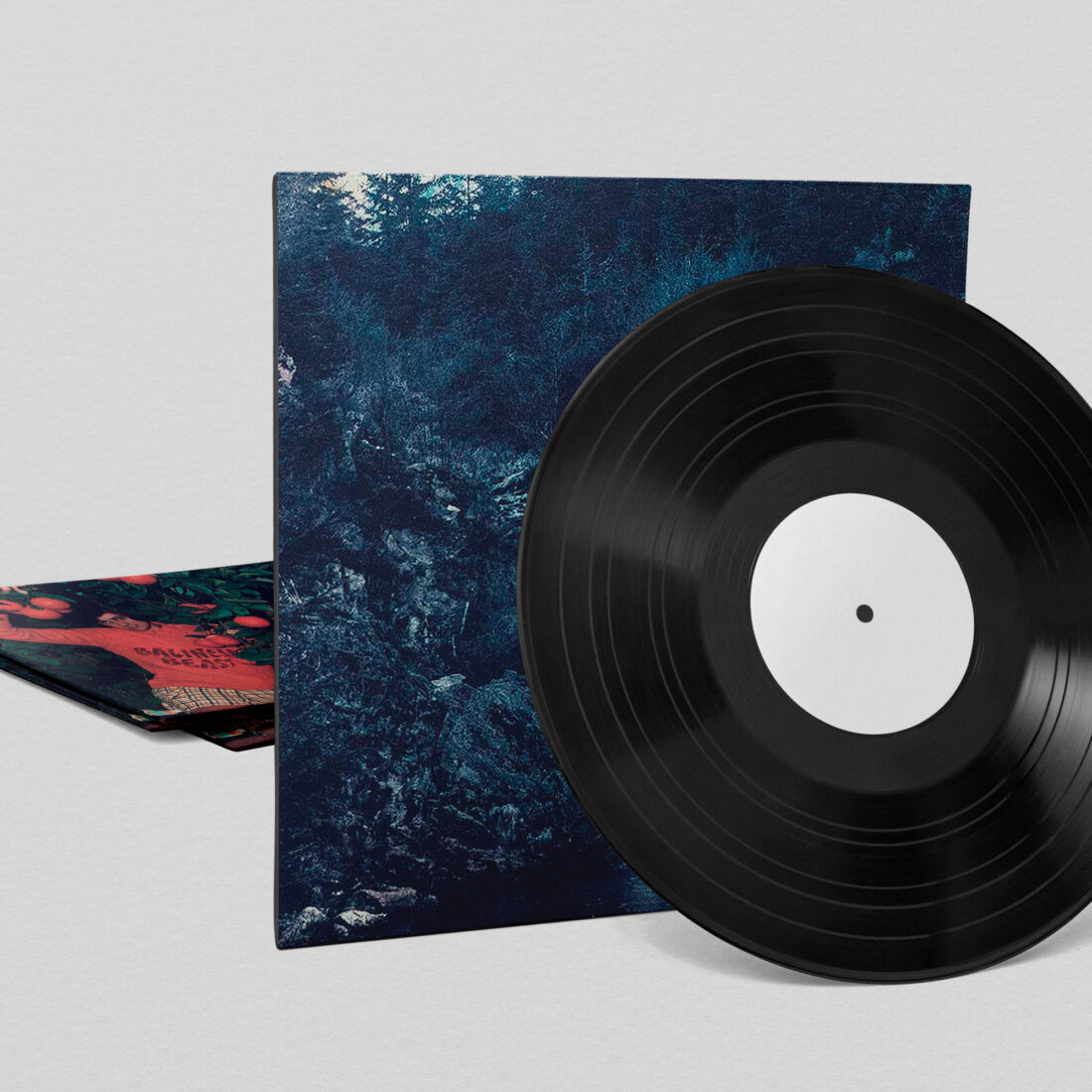 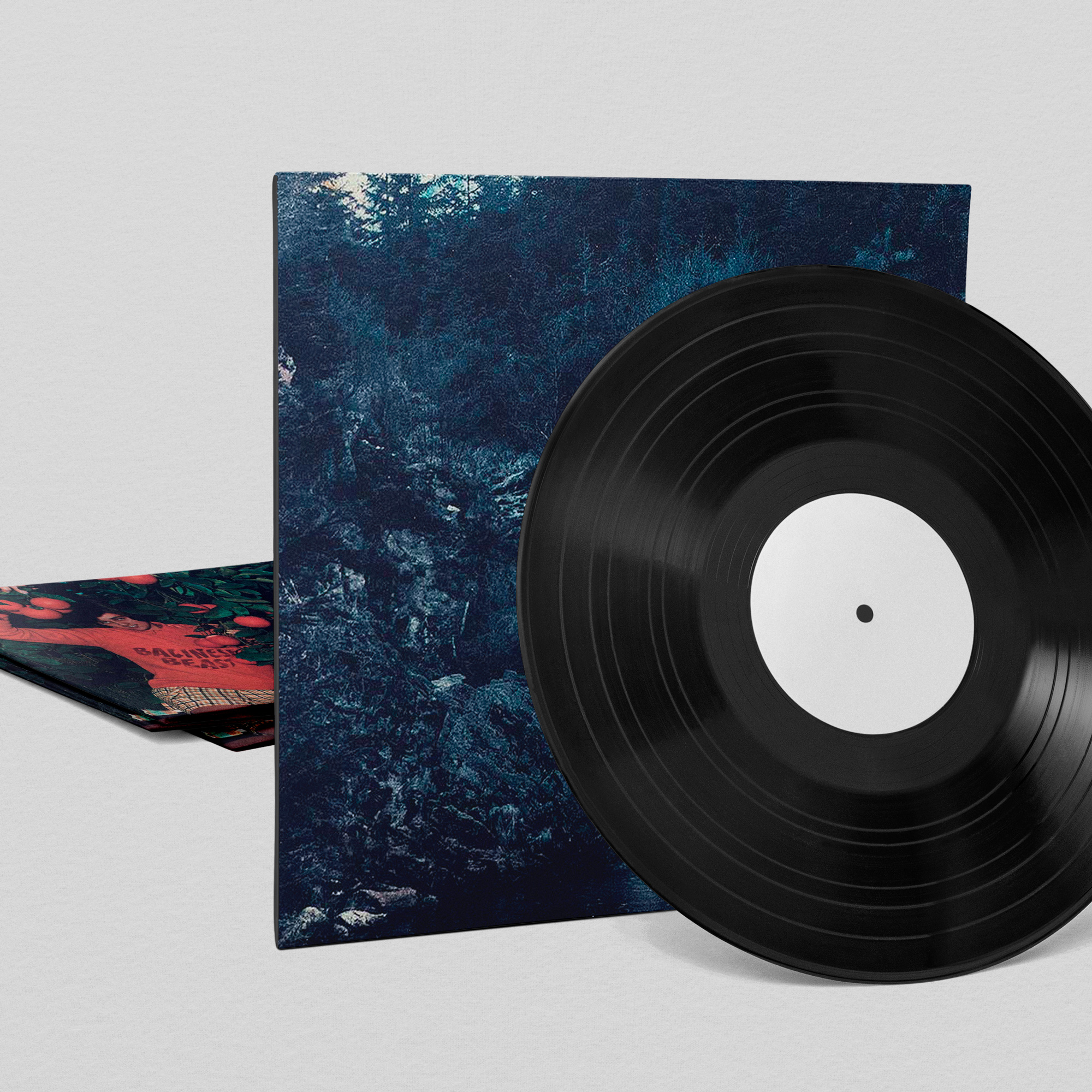 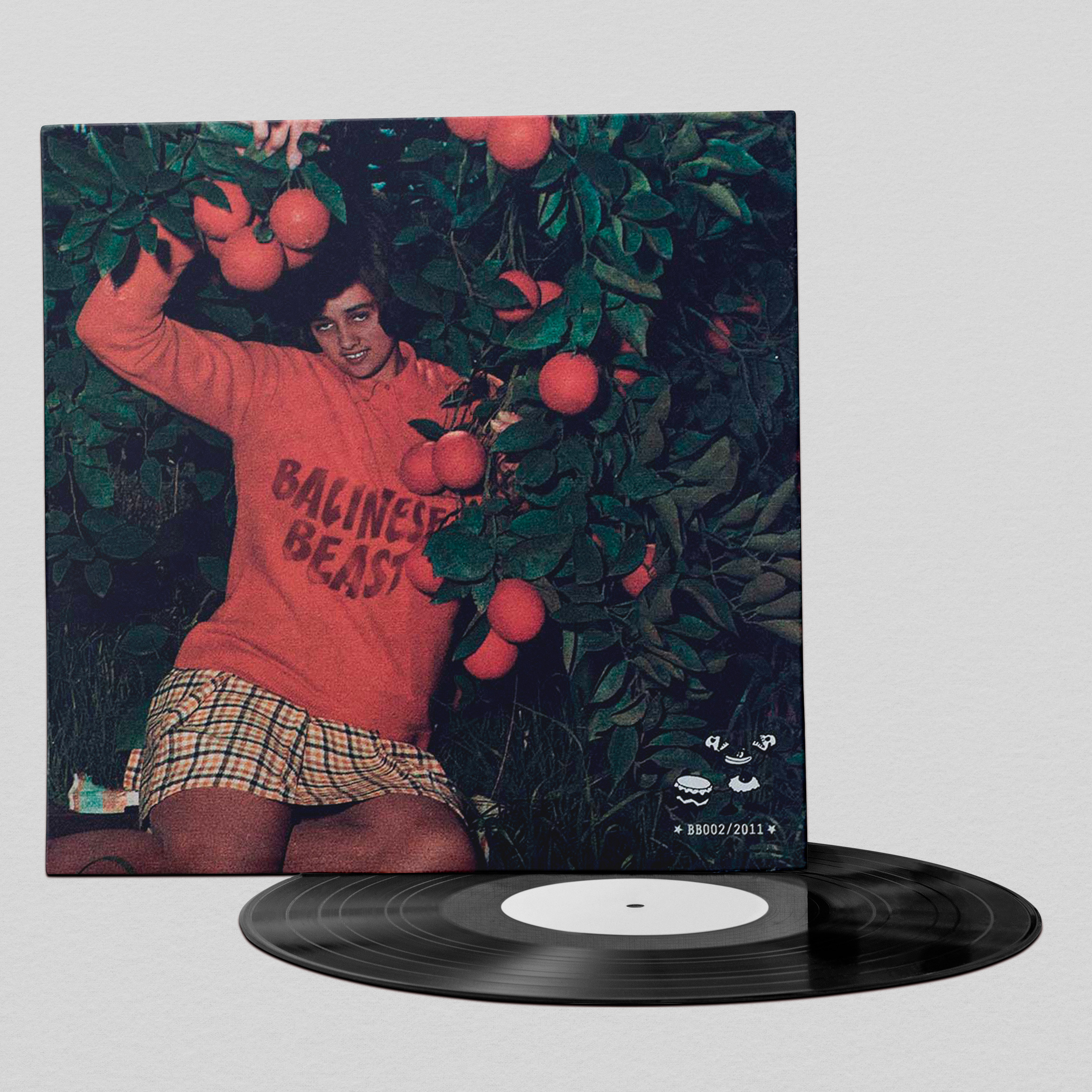 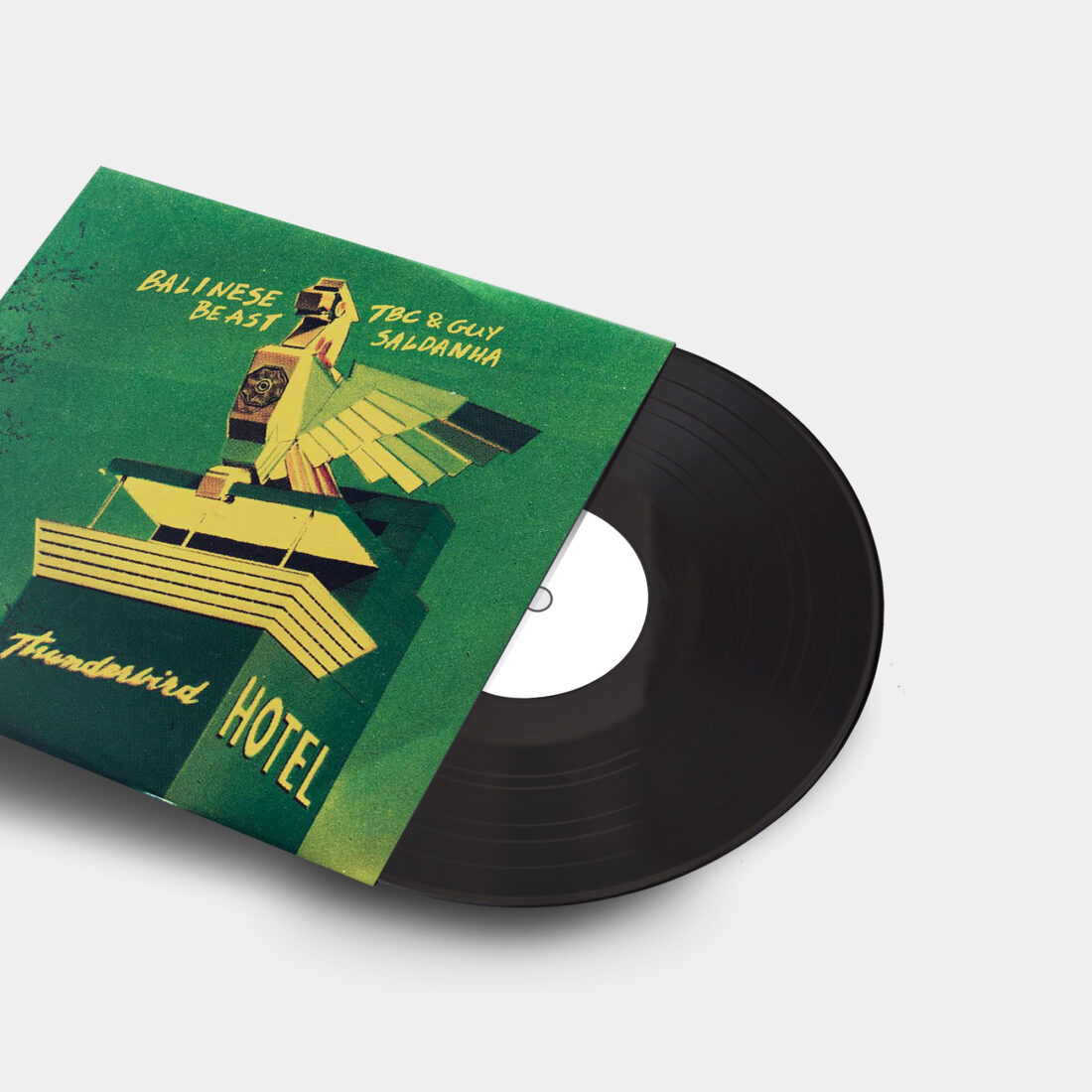 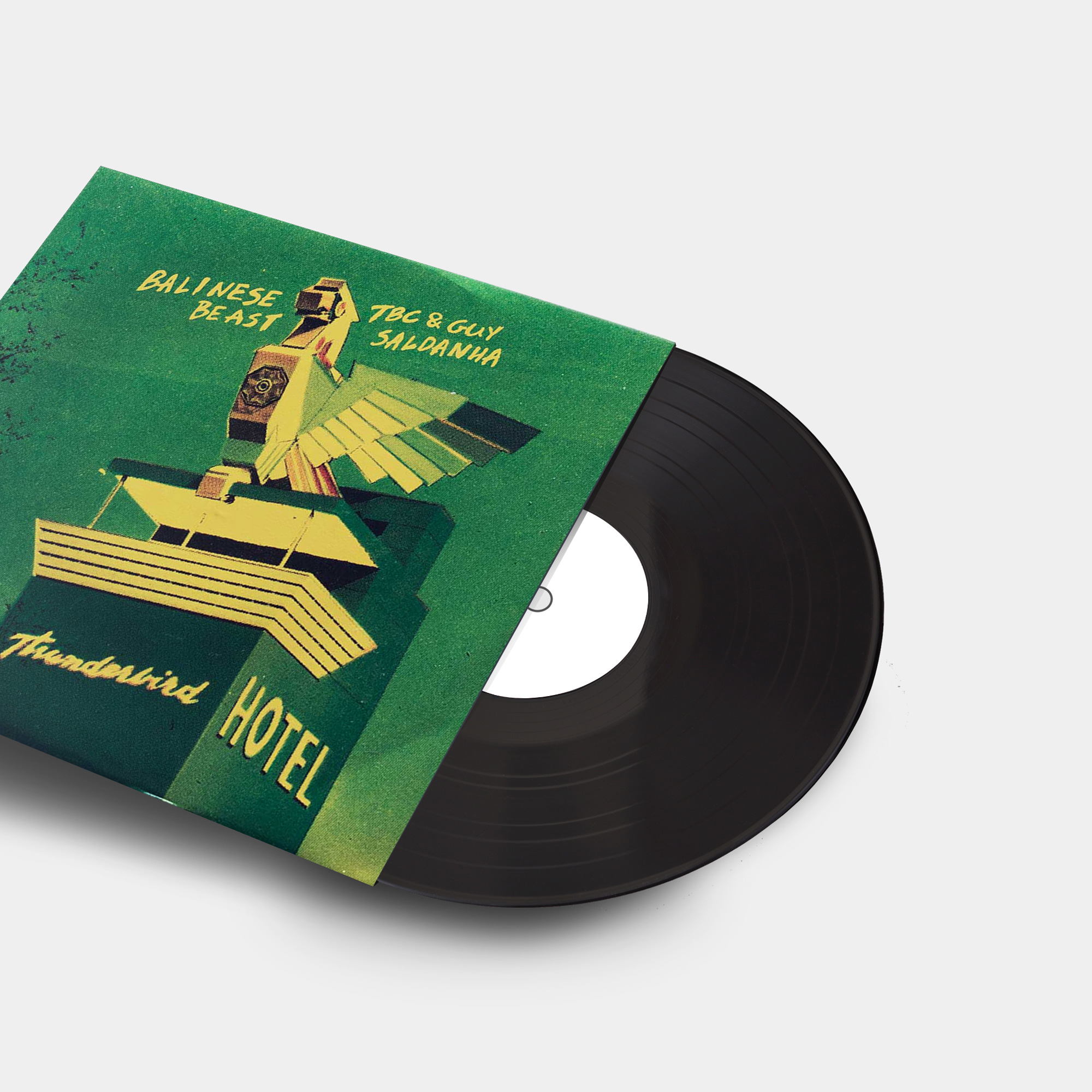 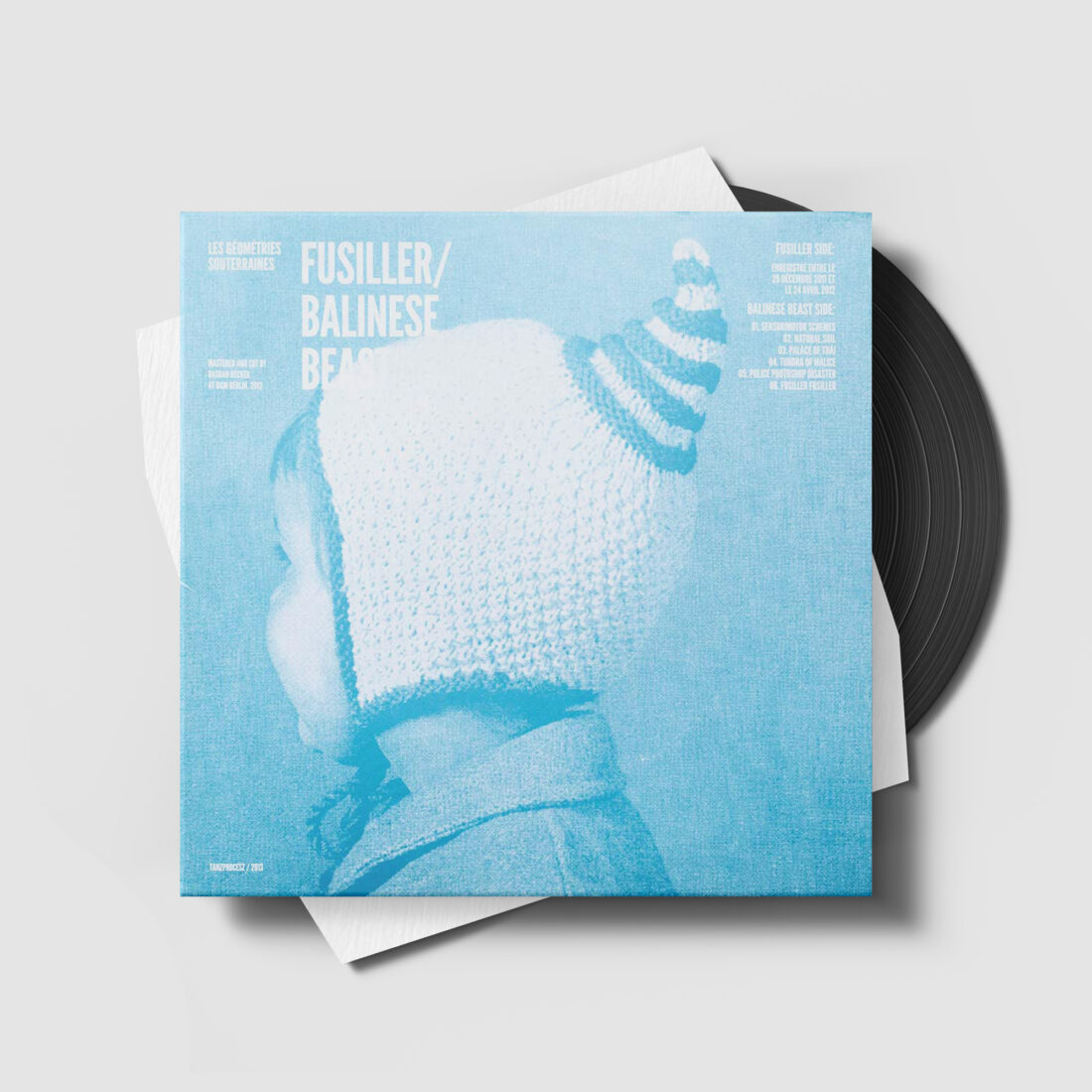 Balinese Beast / Fusiller. Les Géometries Souterraines [Split 12] on fine French label [tanzprocesz] brings together (or fences off – depending on how you look at it), French gonzo electronics project Fusiller (Jonathan T. who runs [tanzprocesz] and is also one half of Opéra Mort) and Greek free sax and home-brewed electronics duo Balinese Beast. Fusiller’s side starts off with a snippet of some feedback shrieks, sci-fi effects and cryptic, distorted mumbled vocals that set the standard for what’s gonna follow. Gloomy atmosphere, created by concrete electronics and supreme tape work, blends with a slew of repetitive patterns, epileptic lo-fi synth lines and weirdo bleeps, resulting in a confusing, trance-like state of insanity. Balinese Beast (George Axiotis and Ilan Manouach), deliver their most refined version of their bona fide cut-ups and electronics. This time they offer a more beat-driven material, like the opening track “Sensorimotor Schemes” that rotates around a stable rhythmic structure with short high-pitched sounds, abstract noises, samples and loose sax grooves that emerge and then dissolve in no time. Their trademark sound collage of feedback, two-penny effects, mixing-board abuse, perverted exotica and cartooney reeds is always present. Only this time it merges with more steady structures, like on “Police Photoshop Disaster” where a repetitive cheapo thrash metal riff meets sax’s echoed minced words and builds up to a chaotic crescendo. 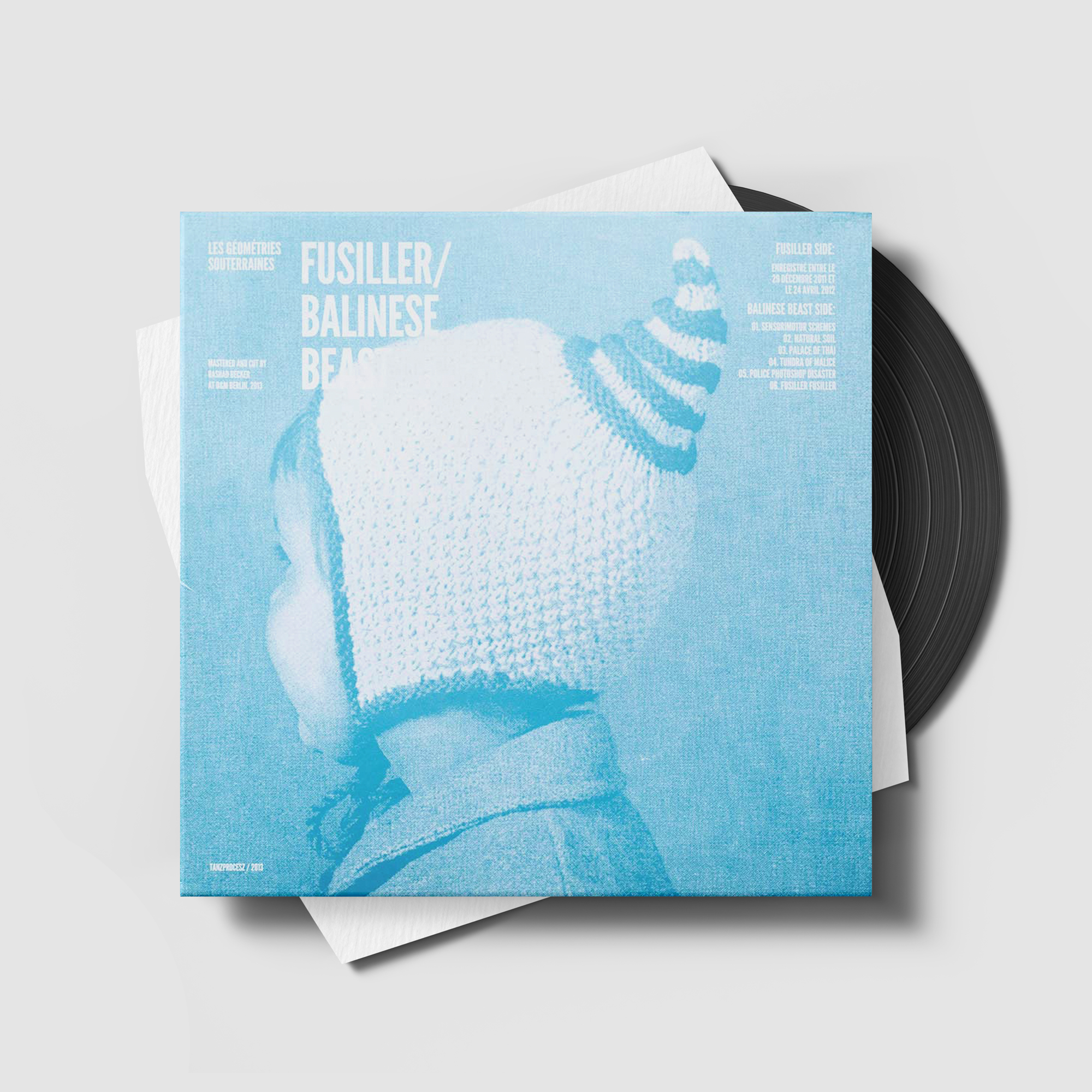 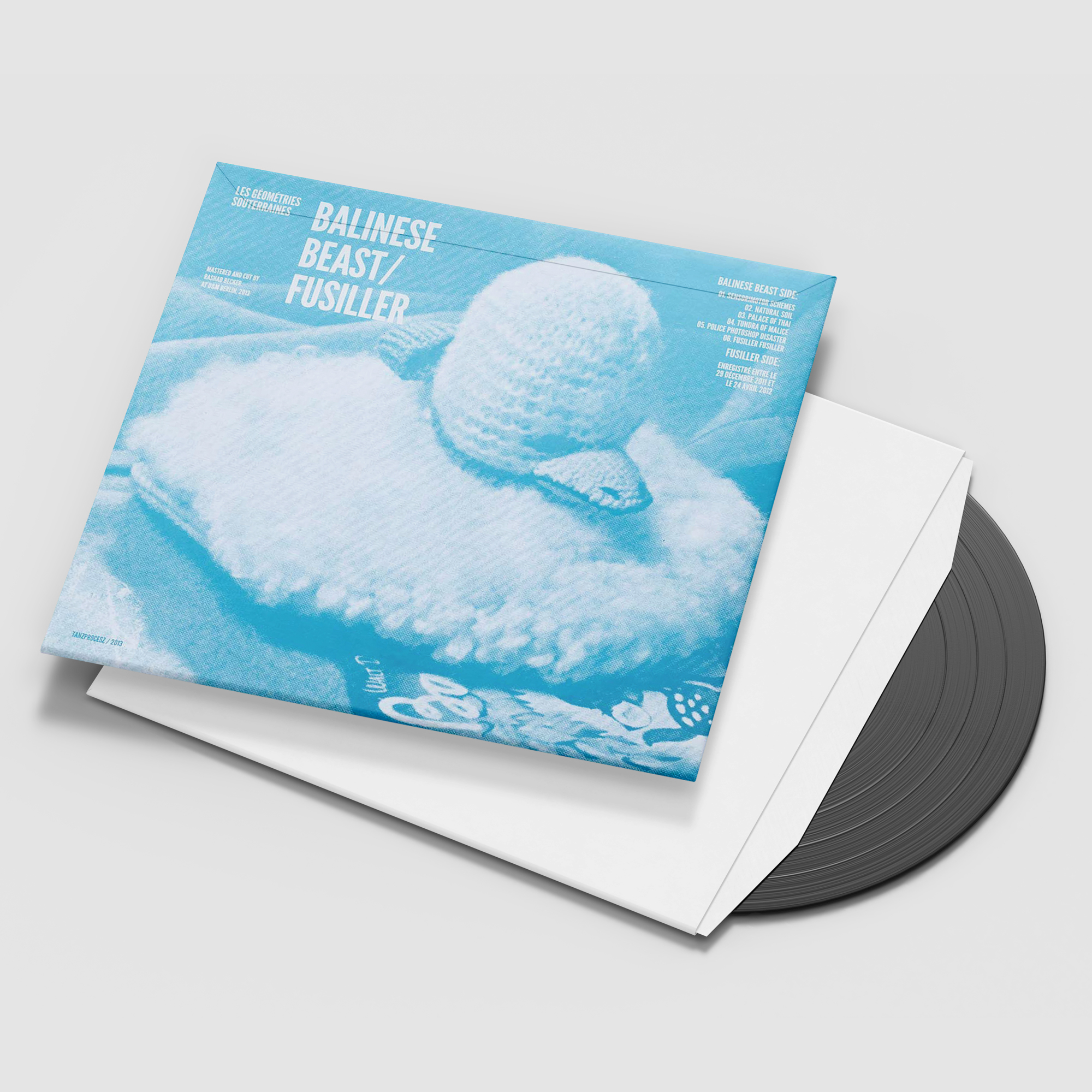 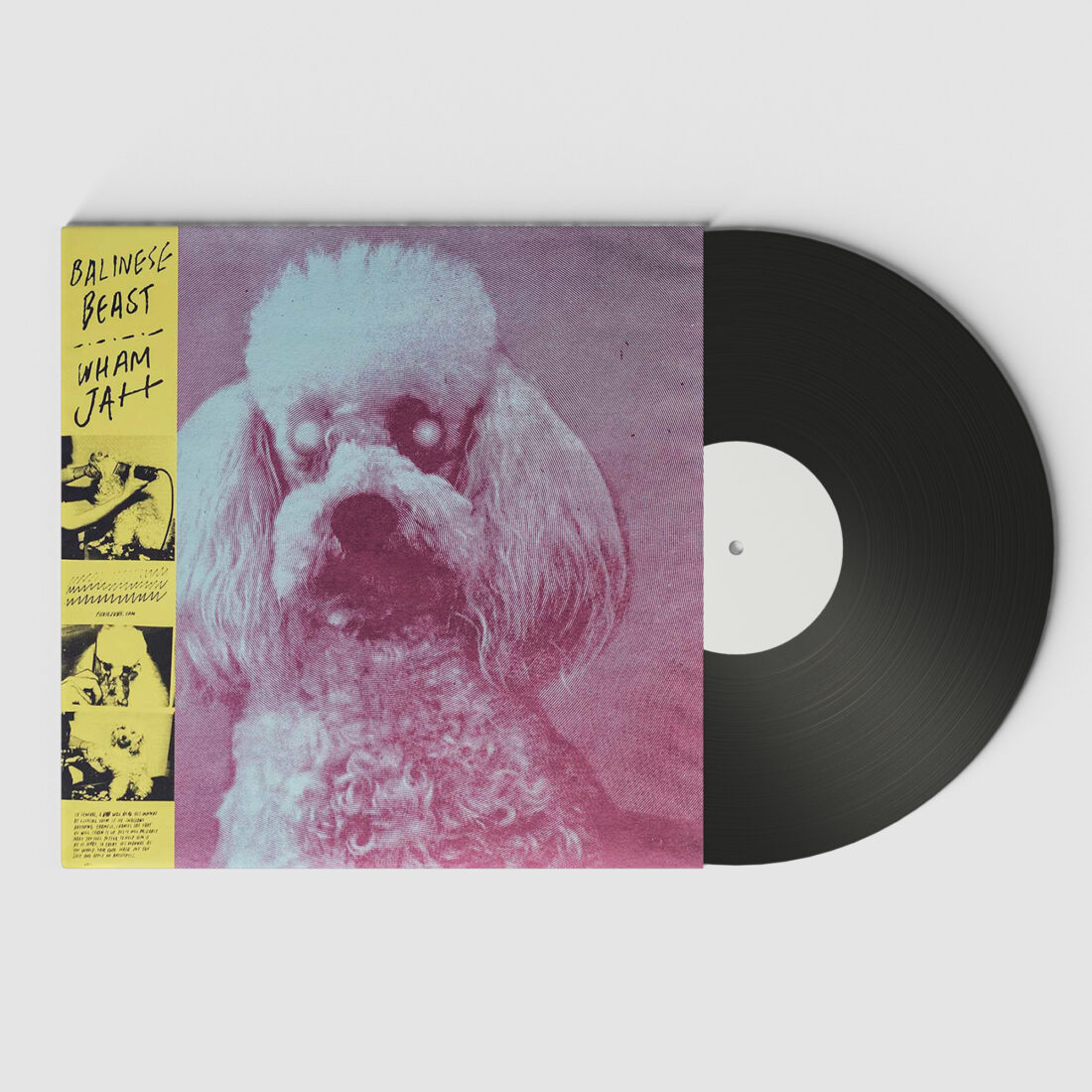 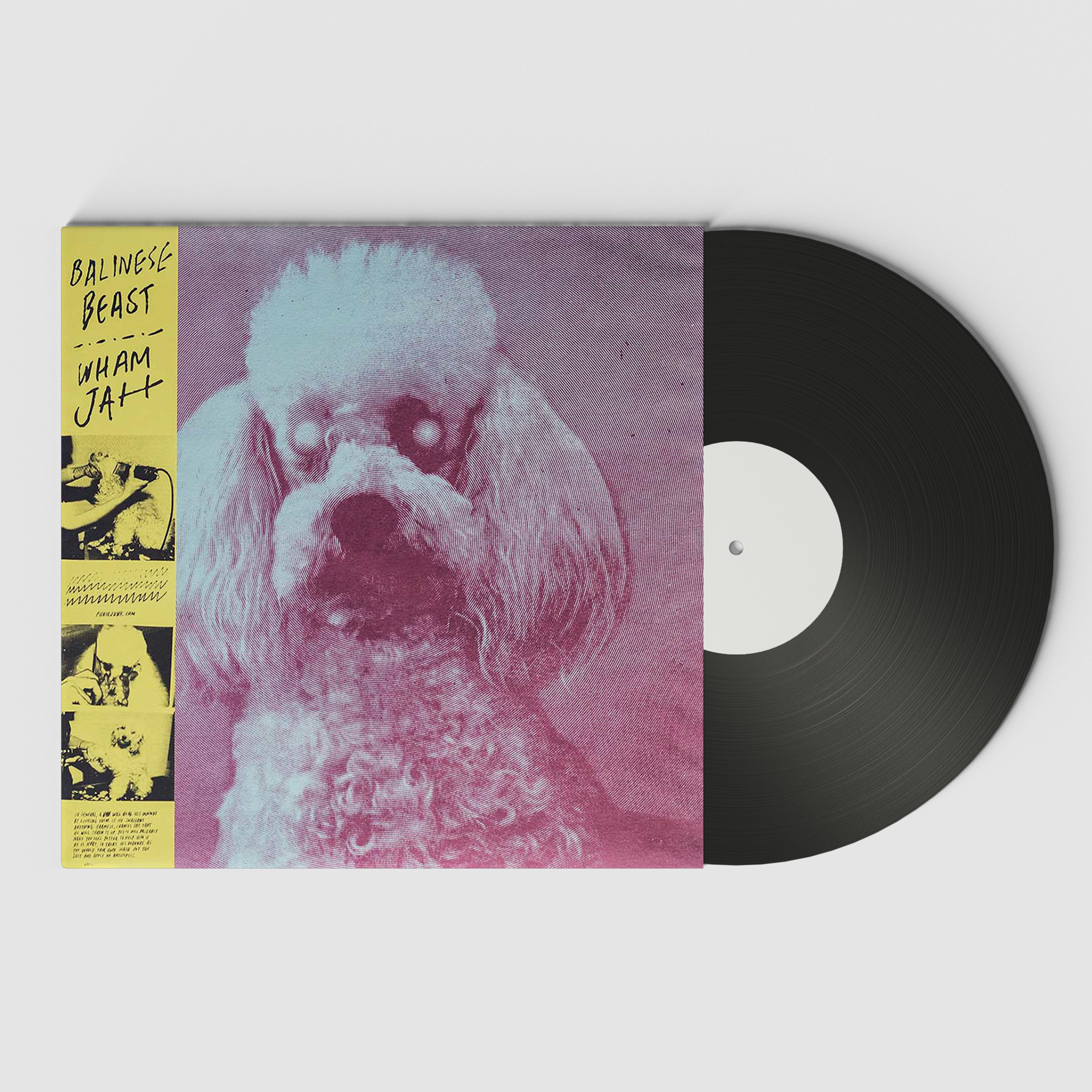 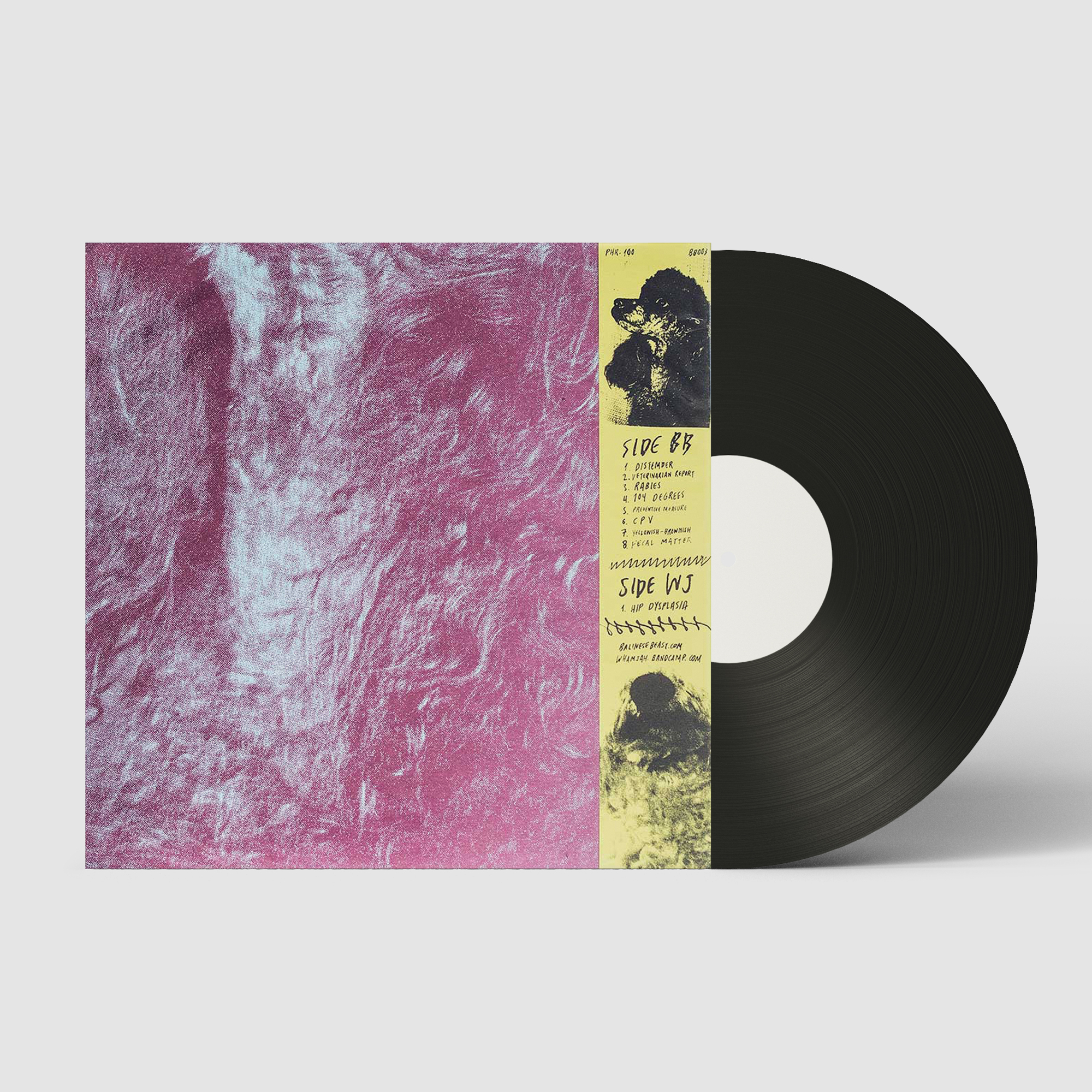 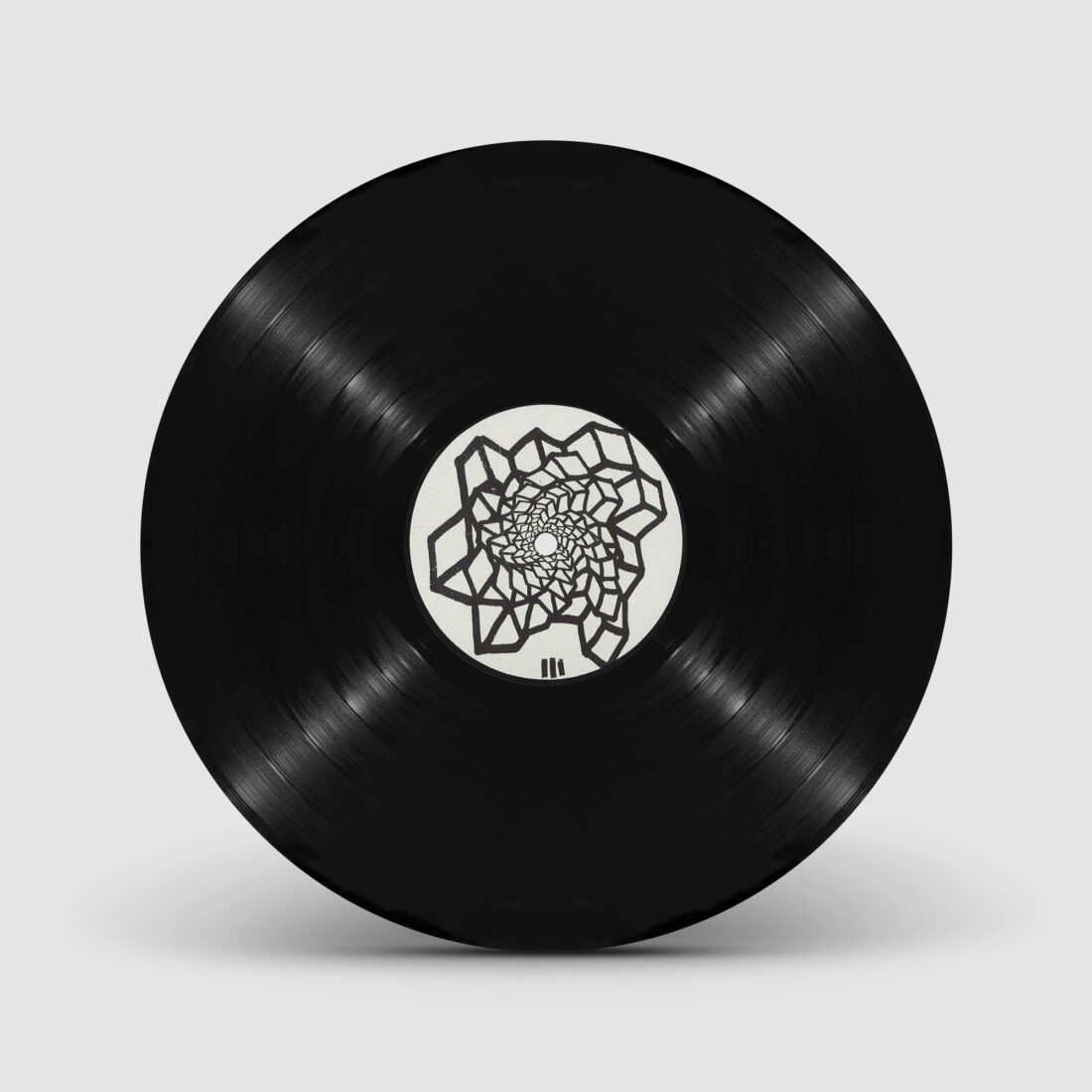 Following releases from Kreon and Lemos, Equivalence returns for its third record with the jazz-infused crossover sound of Glacial. George Laimos (aka Lemos) and Ilan Manouach have spent years crafting a style that combines sultry live instrumentation with subtle electronics in a unique yet natural meeting point between tradition and innovation. In 2012 they released their defining moment to date, a long player on the Welcome To Masomenos helmed Hotel Costes series, while more recently they appeared on Six D.O.G.S with the Entropy EP. Opening this latest offering from the pair, ‘Hardcore Lounge’ is a defining track for the concept of Glacial, characterised by Manouach’s smoky horn tones calling out over a bed of intricate percussion and found sounds that capture the mood of a dimly lit speakeasy in a strange part of town. By way of contrast ‘Byron’s Groove’ lets the drums take the lead, laying down a delicate and expressive house groove with tribal undertones. The details and dynamics of the track build with a patient focus, creating an immersive atmosphere populated with alien frequencies. The ‘Dub Mix’ of ‘Hardcore Lounge’ completes the EP with a lopsided groove that nags at the brain while appealing to the body, pushing another tightly wound array of rhythmic elements that rub up against organic scrapes and shuffles in a most distinctive abstraction of contemporary dance music. With its fusion of human and electronic soul, this latest transmission from Glacial further establishes the duo as an exciting force within the more experimental corners of the house and techno community, paying respect to the music of the past while reaching forwards into previously unexplored territory. EP | 2016 | SOLD OUT 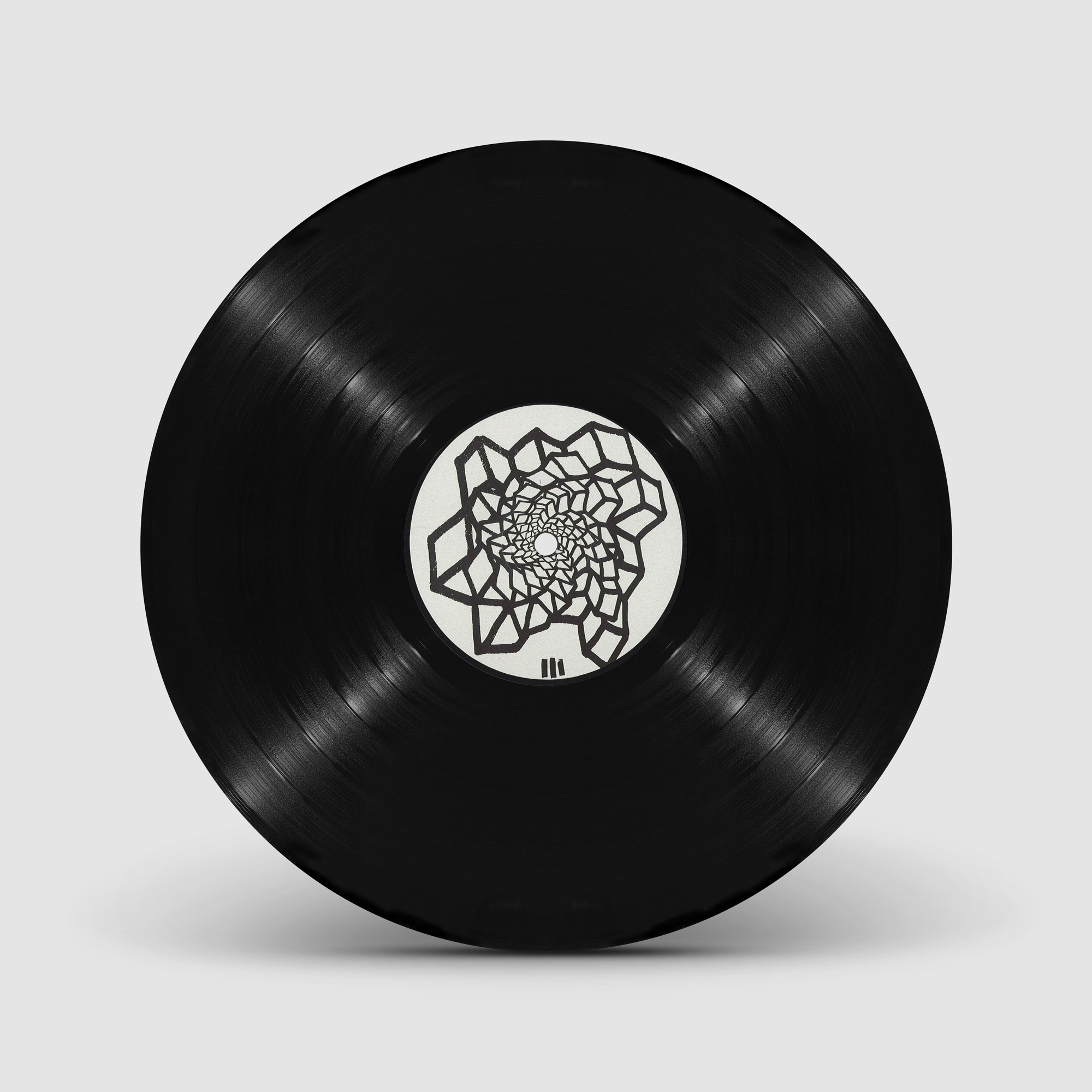 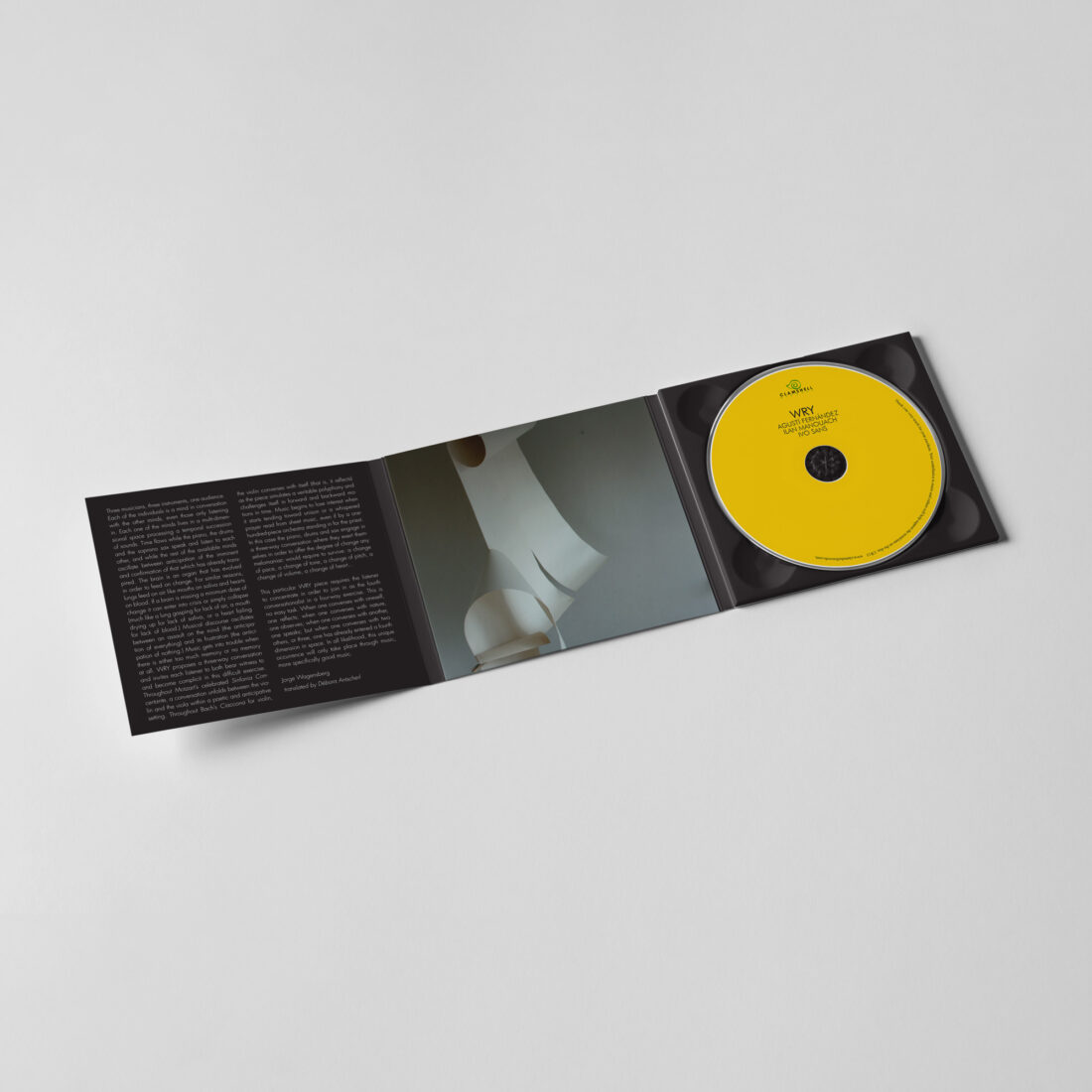 Three musicians, three instruments, one audience. Each individual, a mind in conversation with other minds, those playing and also those listening. Each mind living in a multi-dimensional space, processing a succession of sounds in time. Time flowing while the piano, the drums and the soprano sax communicate with each other; while every mind oscillates between anticipation of the imminent and confirmation of that which has already transpired, an exercise in concentration and abstraction. WRY kicks off a three-way conversation inviting each listener as fourth party to both bear witness to and become complicit in this difficult exercise. And just like the brain thrives and evolves with change, the musicians exert themselves to offer the change required for survival: a change of pace, a change of tone, a change of pitch, a change of volume, a change of heart… 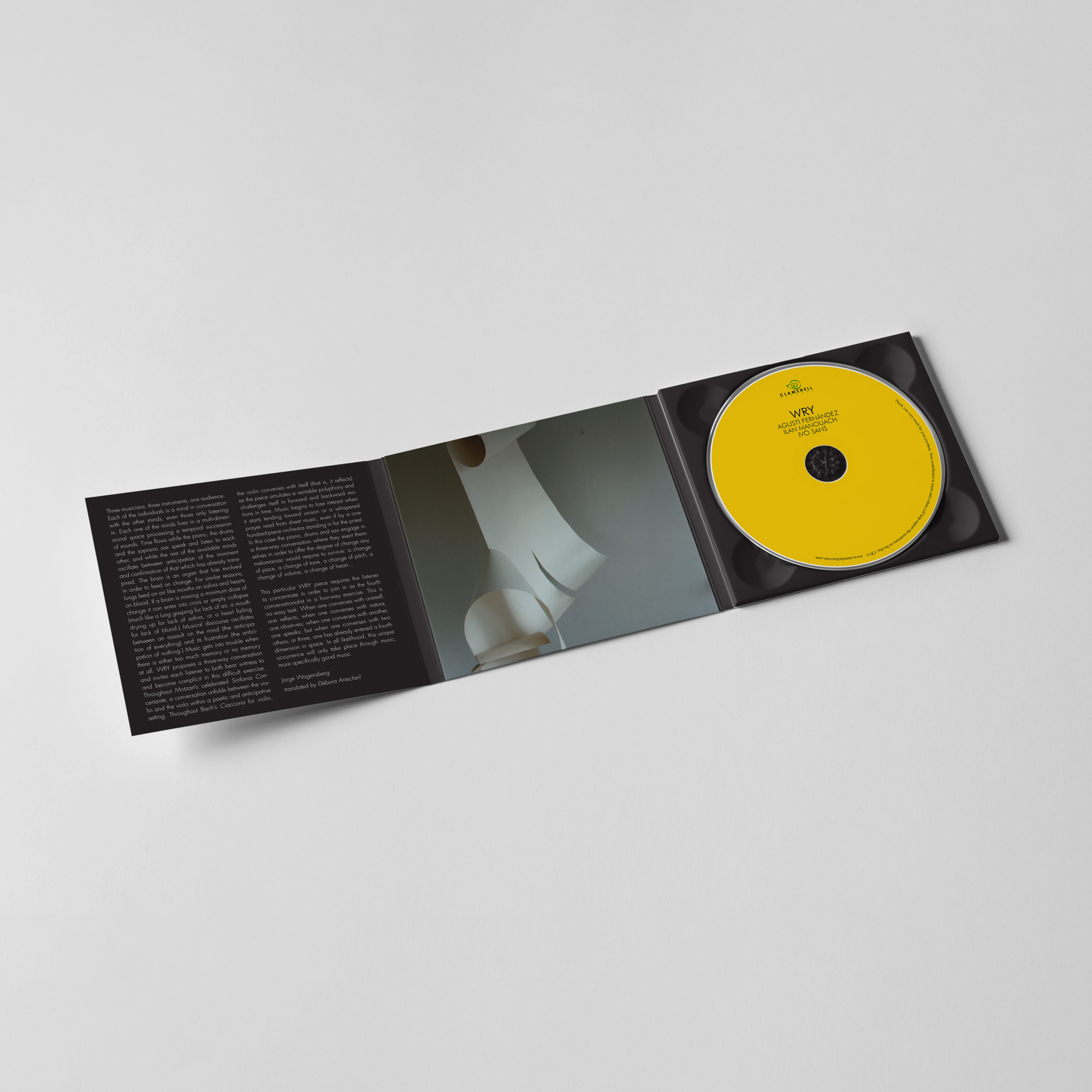 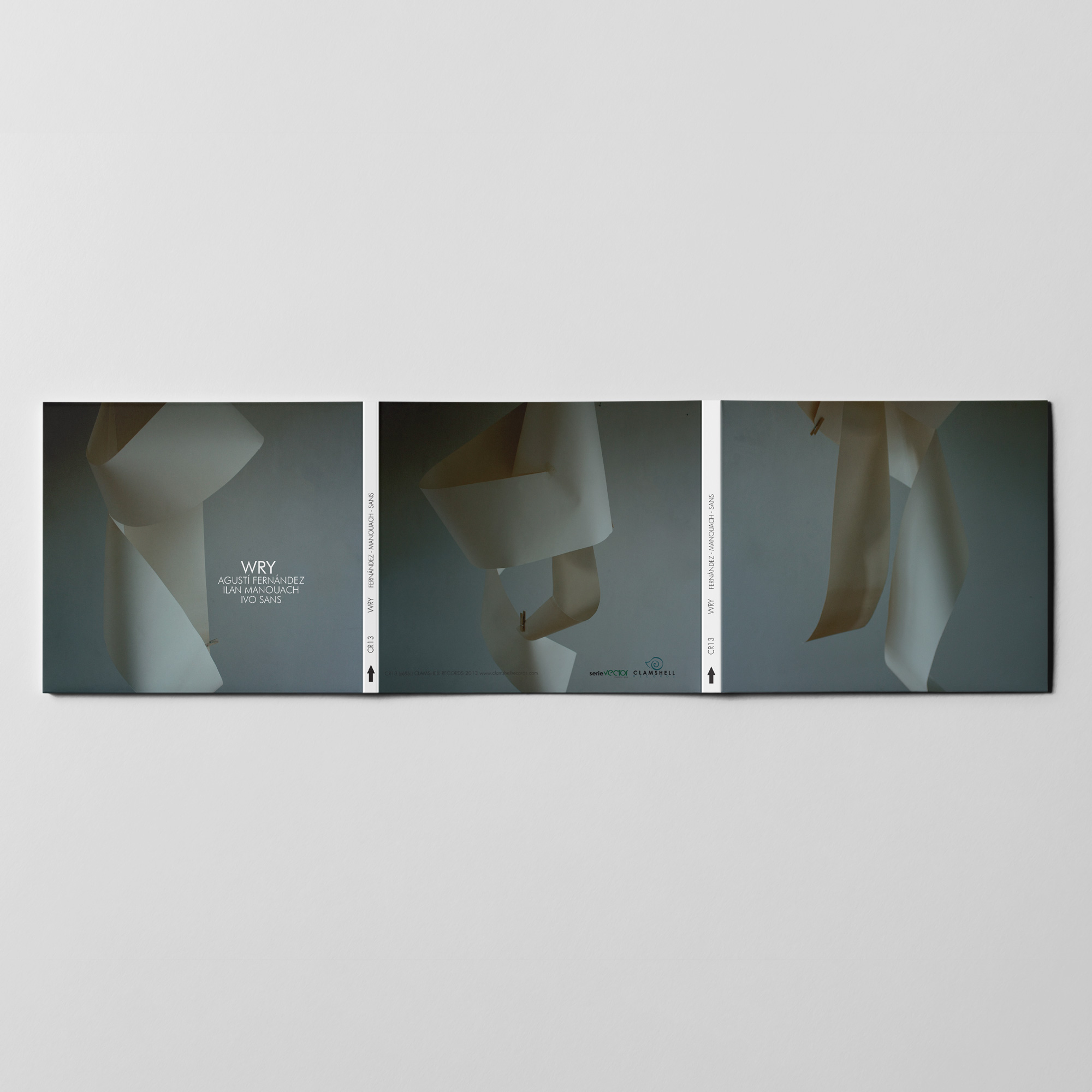 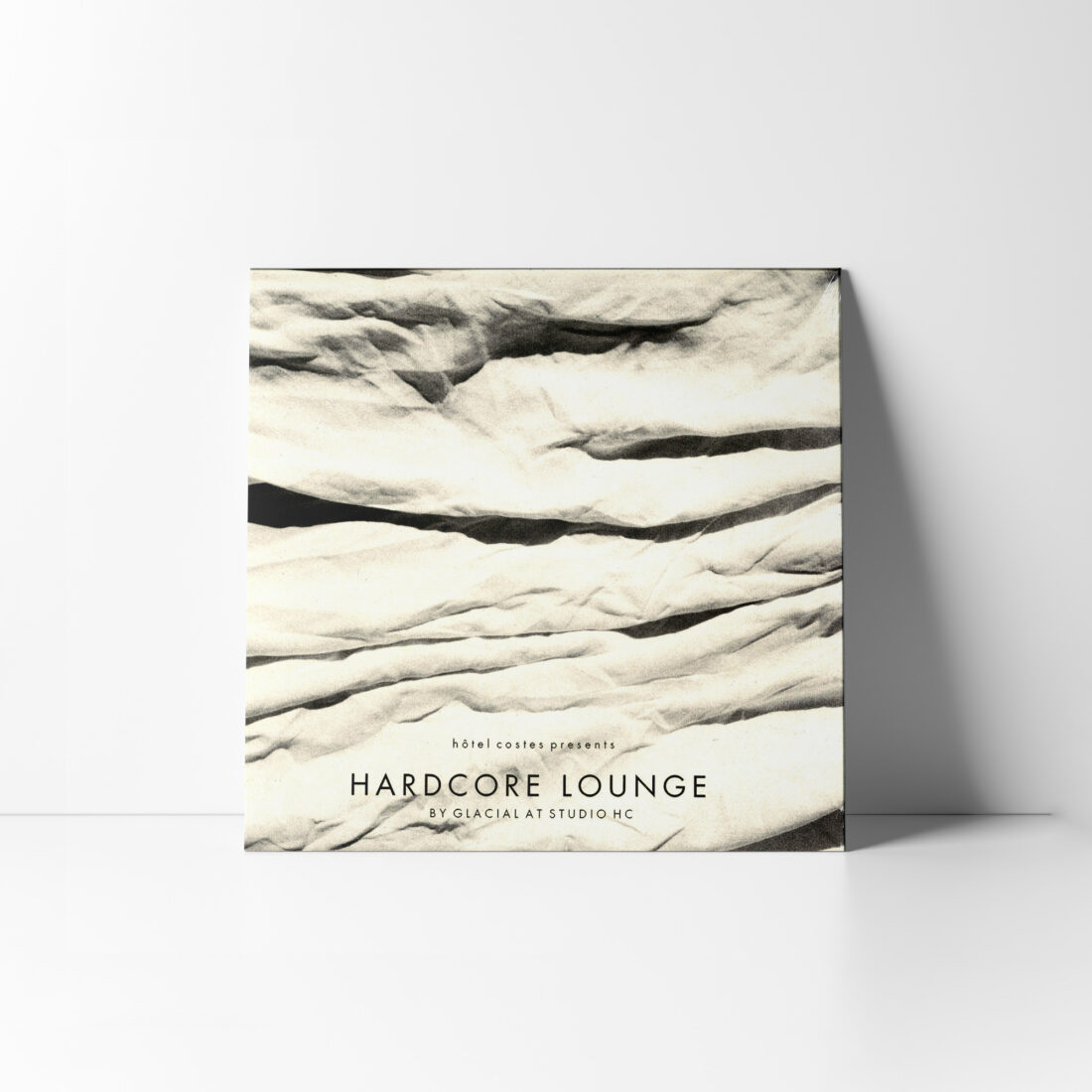 The “Hôtel Costes Presents” series returns this March with ‘Hardcore Lounge’, the new album by Greek duo Glacial, comprise of eight original tracks and a special collaboration with the well-know star singer Giorgos Mazonakis who features on the hit single “Den Ime ego”. Glacial is the joint project of renowned Greek techno/house producer Giorgos Lemos – also known as Lemos – and saxophone player Ilan Manouach. The duo released their debut album back in 2012 via the former “Costes Presente” series. With this new album, the band is back together for a release on the new “Hotel Costes Presents” series, once again delivering their inimitable twist on jazz infused electronic music. A focal point from the album comes in the shape of ‘Den Ime Ego’, which sees Glacial collaborating with one of Greece’s most infamous pop singers, Giorgos Mazonakis, to create a cinematic composition driven by emotive string, jazzy drums and airy sax tones alongside Mazonakis haunting vocals. Tracks like opening cut ‘Love Letters From Ankara’, ‘Wiggle Space’ and title-cut ‘Hardcore Lounge’ showcases Glacial’s more jazz leaning influences, fusing wandering sax lines, hazy atmospherics and dusty drums to paint a picture of smoky dark rooms and a hypnotic aesthetic. Further contributions like ‘Bouche Fermee’, ‘Normies’ and ‘Miroloi’ brings us back to Lemos’ past with stripped-back electronic sounds, bringing a minimalistic rhythmic style and intricate synth work to the forefront. 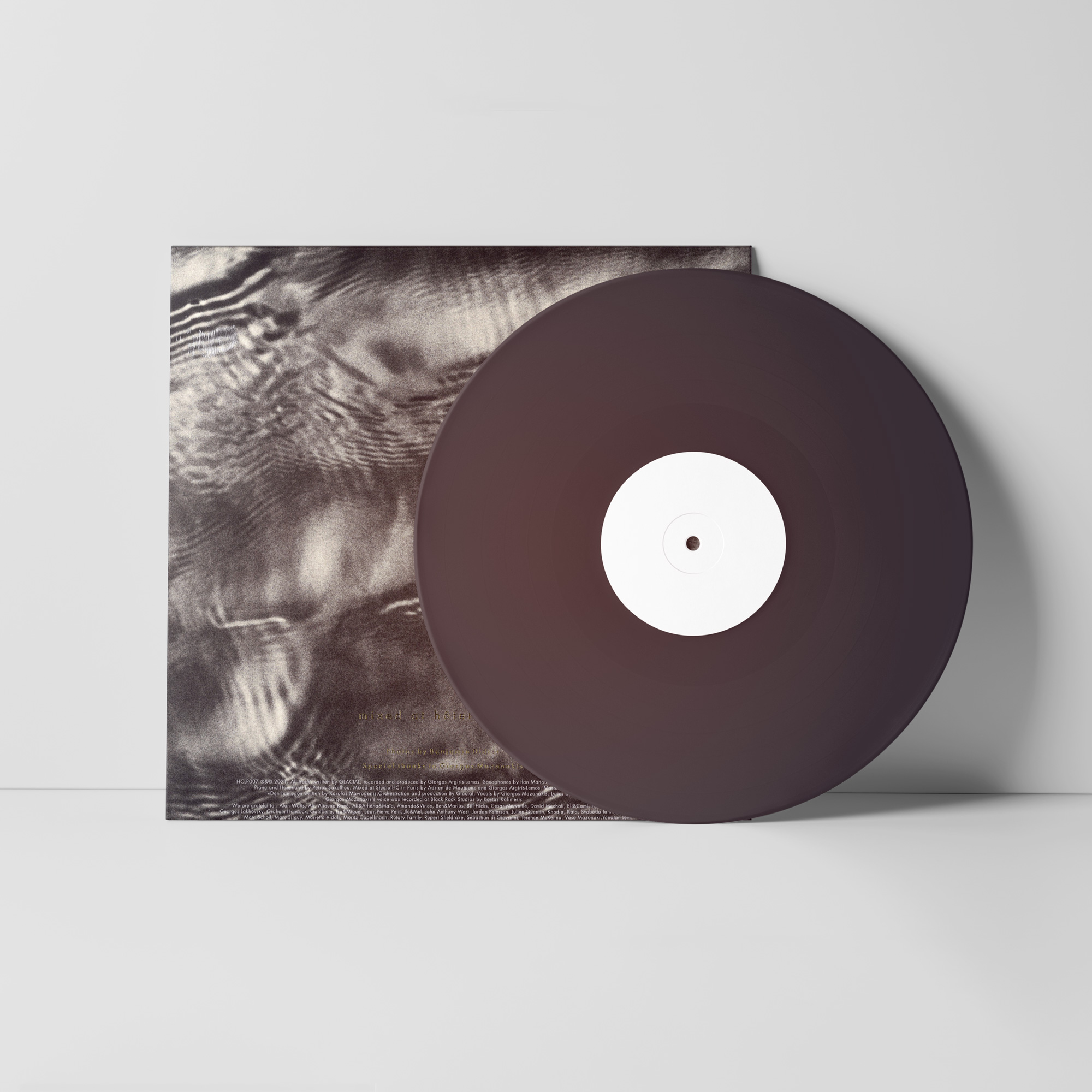 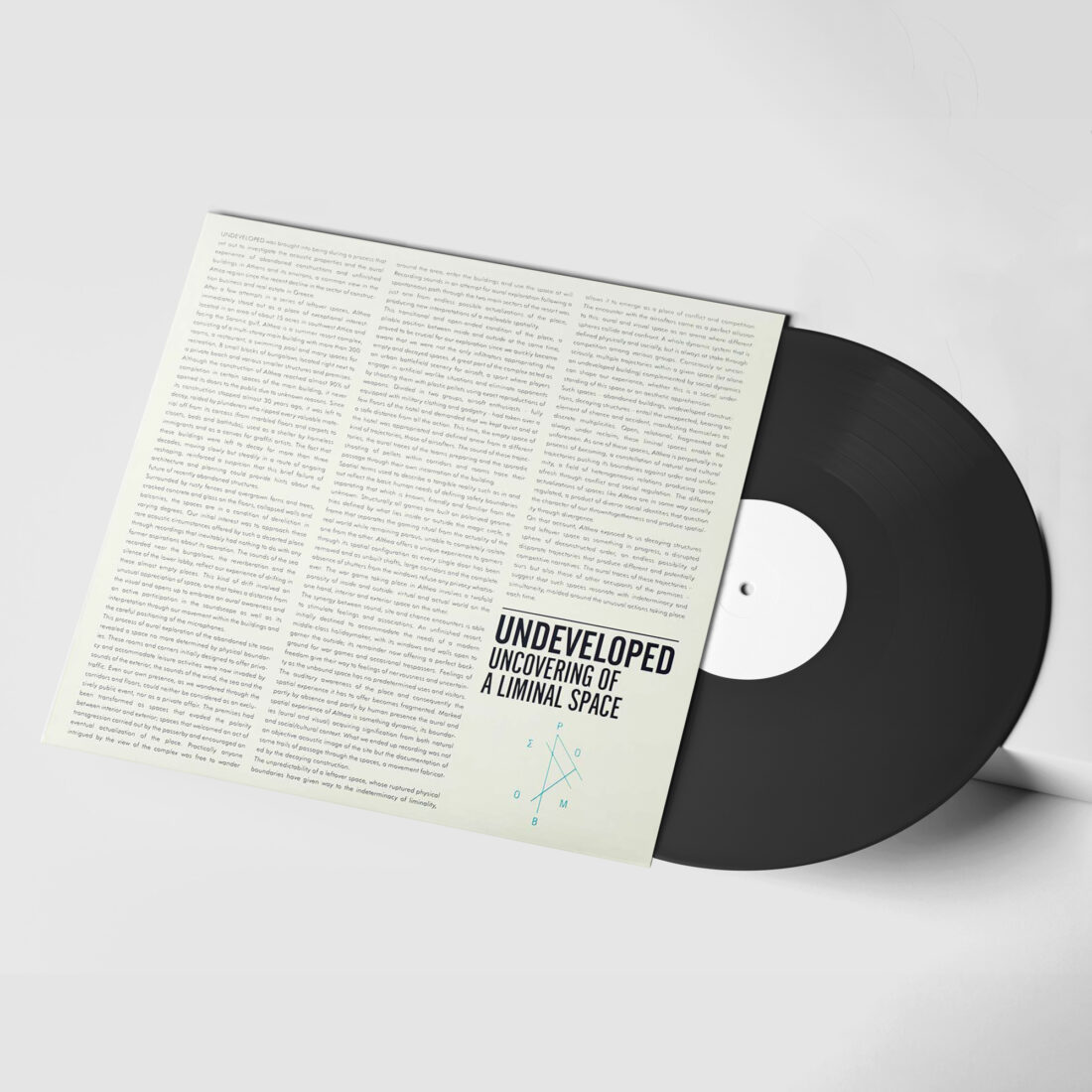 Undeveloped was brought into being during a process that sought to investigate the acoustic properties and aural experience of abandoned constructions and unfinished buildings in Athens and its environs, a common landscape in the Attica region since the recent decline of construction and real estate business in Greece. Using field research, we collected small aural and visual fragments of the abandoned resort Althea and its current uses; these fragments resulted in a mixed-media installation and a vinyl LP that act as documentation of the investigation. Althea, a five-hundred room resort, has deteriorated during the last fifteen years, vandalized by scavengers and recently occupied by extreme right paramilitary training groups. The recordings of the premises were relevant, as they illustrated the failure of the liberal growth dictum in Greece as well as the ill-designed construction development based on the tourist national capital. The album’s release presentation was accompanied by an installation of a large display case that collected the firing ammo found on the hotel premises, serving as a document of the building’s long occupation by the paramilitary extreme right groups. 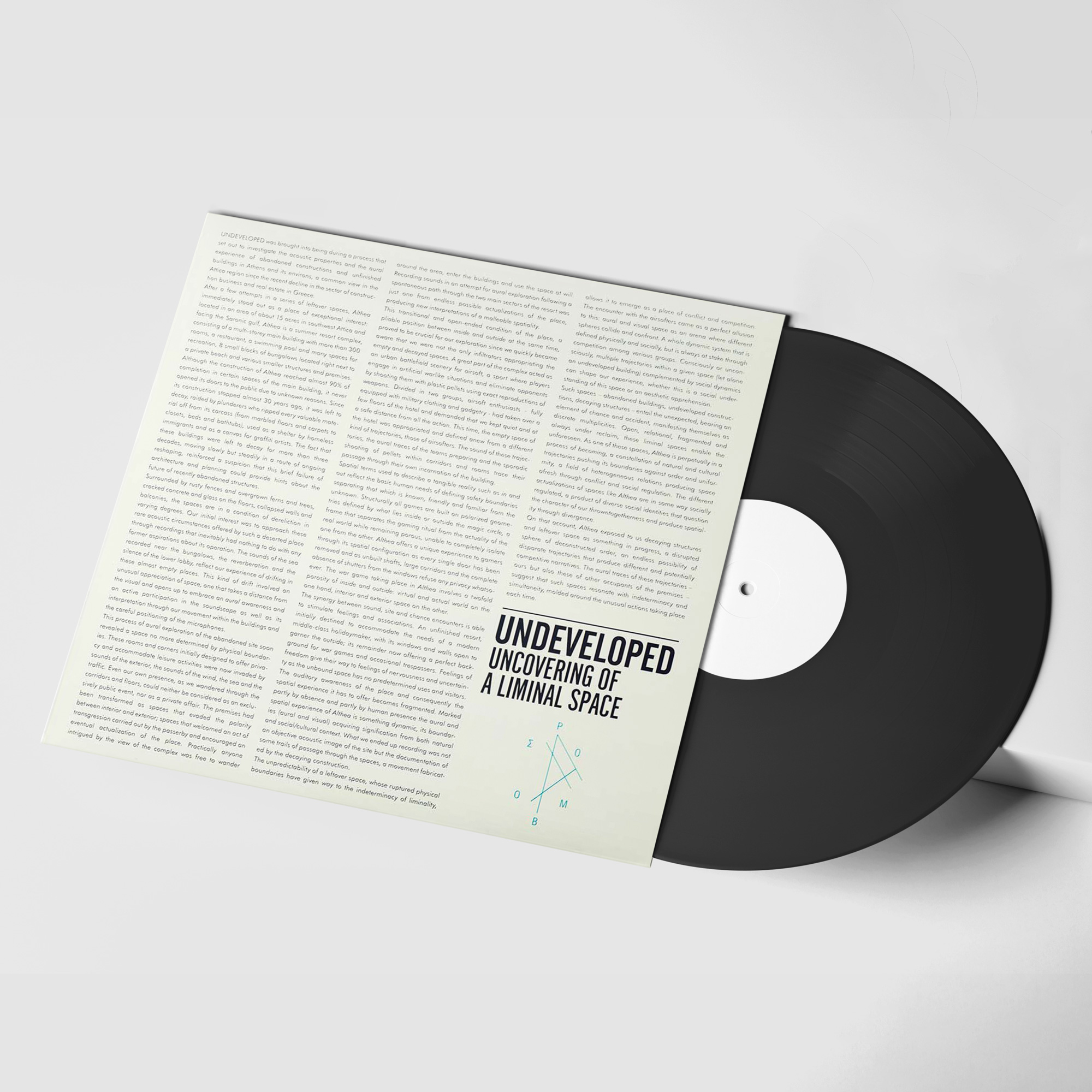 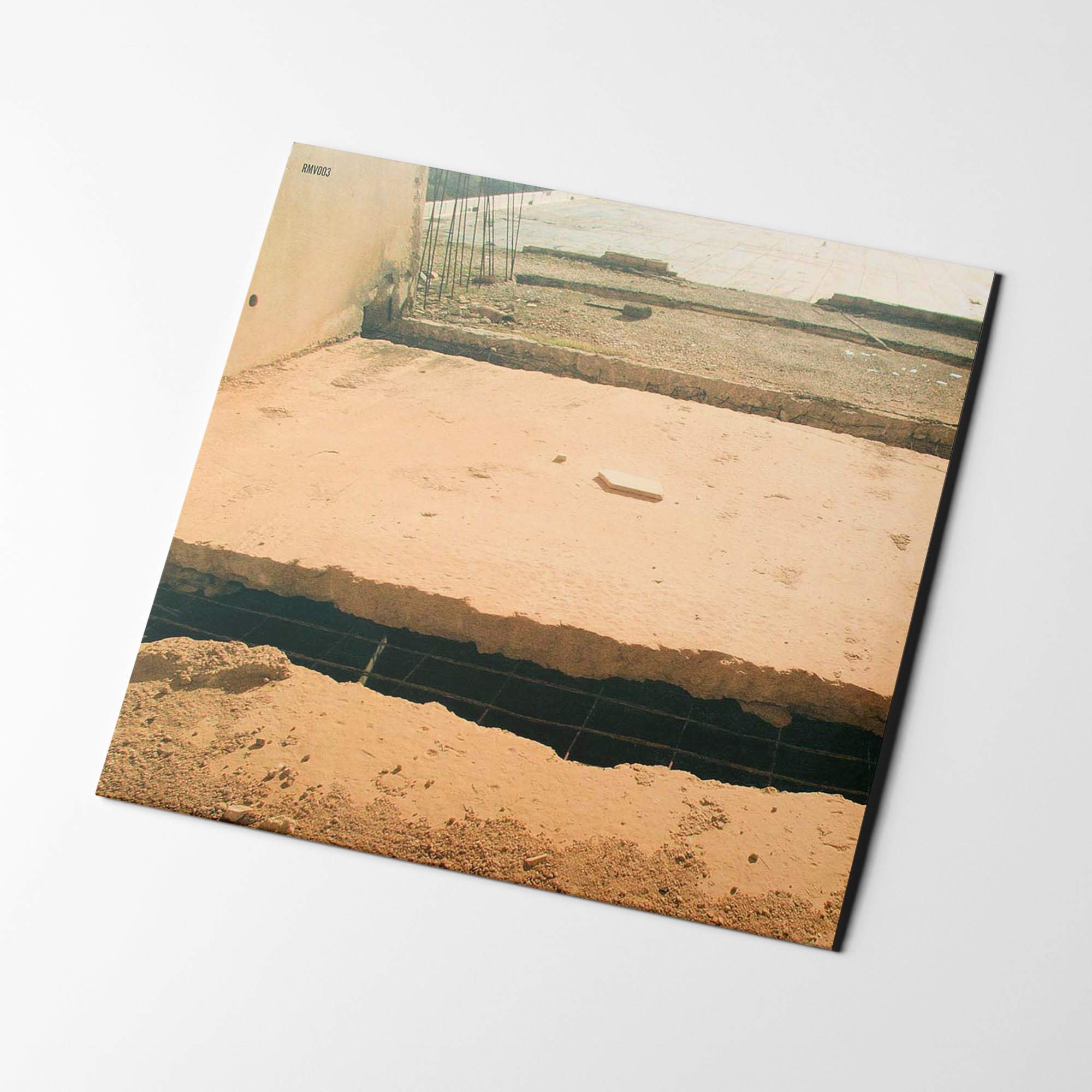 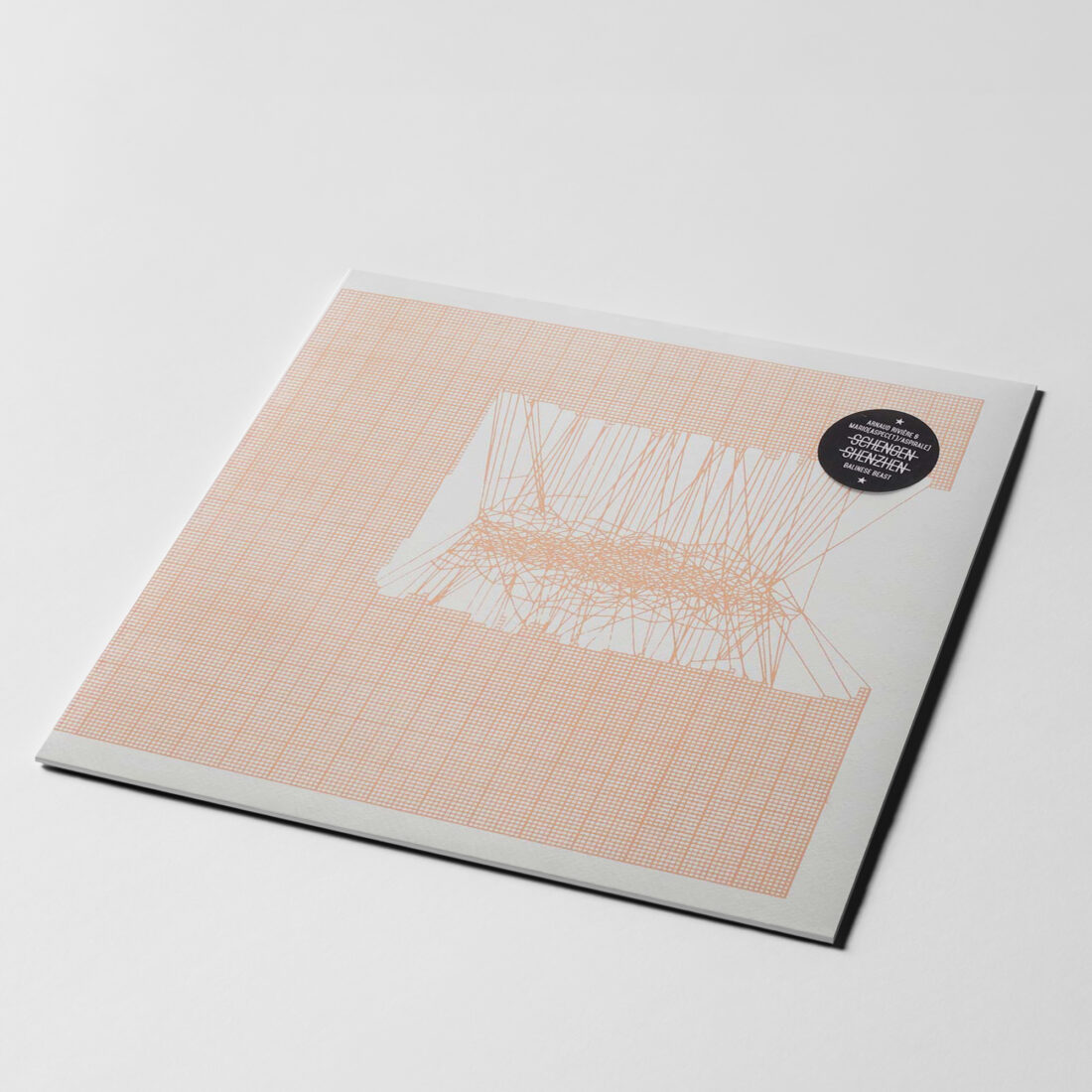 Balinese Beast / Mario Gabola & Arnaud Riviere – SchengenShenzen [Split] LP. The record has just been dropped off and, oh boy, did this took quite a good deal of effort to come out as it not only assembles two of the most intriguing European noise/imrpov duos, namely ARNAUD RIVIÈRE / MARIO GABOLA & BALINESE BEAST, it was also co-released under the aegis of three different labels, Athenian weirdo outlets PHASE! and MORE MARS and Mario’s own venture into improvised music, VIANDE RECORDS. The first side, moving closer to the harsher end of the spectrum, is dedicated to the documentation of a live collaboration from 2011 between Parisian turntable mutilator Arnaud Rivière who’s using reconstructed phonographs and prepared mixing boards and Mario Gabola from Naples who is one half of Aspec(t) and one third of A Spirale – for the purposes of this recording he provides feedback and resonance by self-made instruments and percussion. The opening track, FRAGMENT is a really hard-edged but neat assortment of hisses, distortion, percussive patterns, silence and feedback failures adorned towards the end by spastic crashes, howls and turntable onslaught. IT IS QUITE COMPLICATE on the other hand is a way more solid artifact whose radio fragments of the first seconds give way to an avalanche of textured noise and monumental eruptions. THIS IS NO SAX SONG briefly closes the side with fast-paced flops, metallic clangs, chopped feedback and tiny pauses. On the flip-side, Athenian charmers Balinese Beast (Giorgos Axiotis and Ilan Manouach), counting more than ten releases over the past four years, attempt here a shift from their usual frenzied and hyper-active cut-up style towards somehow longer structures – despite the fact that once again they succeed to pack five tracks in less than 18 minutes using their routine gadgetry of samplers, drum machines, no input mixers and free saxophones. Still, their material is hard to pin down. The opening track PRONOUNCE features a really superb upright bass sample that acts as a nexus that holds the piece together and is occasionally decorated by sparse drum machine patterns and exquisite reed blowing. The static that opens COLCANNON NIGHT is held together by a constant metallic hum, gradually sliced by noises and sampled jazz tracks, ending with some sweet sax playfulness, while MIDI MARKET features some oriental pipe patterns, overwhelmed by some Euro-dance sounding raw synth build-ups. THANKS MOM is a typical Balinese smart cut-up and rearrangement celebration but one of the highlights is the closing track LA DÉPÊCHE DE TAHITI, a true slow burner with an elegiac opening, a few slow moving layers of mournful sax and some delicate gestures on top of spiraling synth lines. Overall, a record that places all four of them in the highest ranks of the freak register. 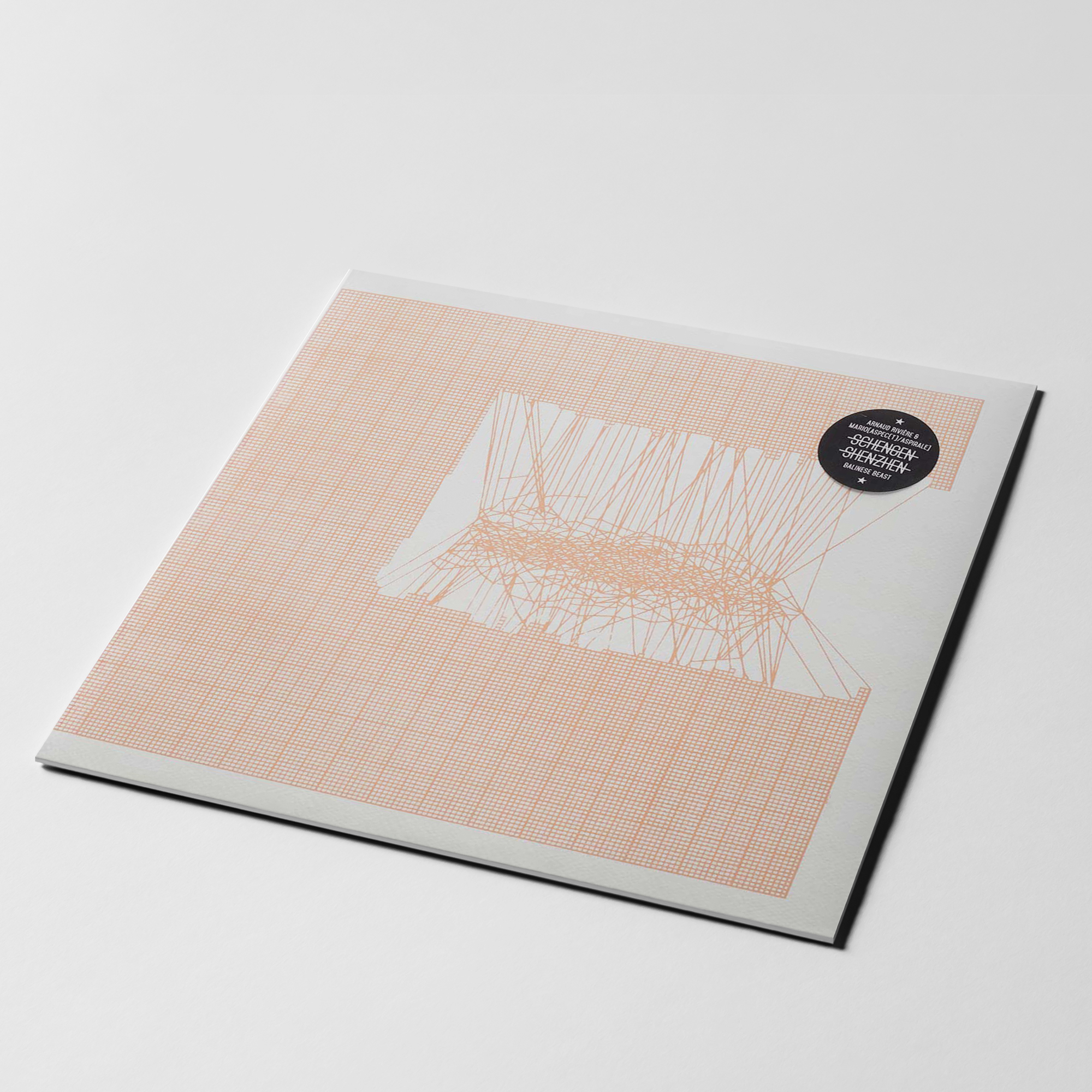 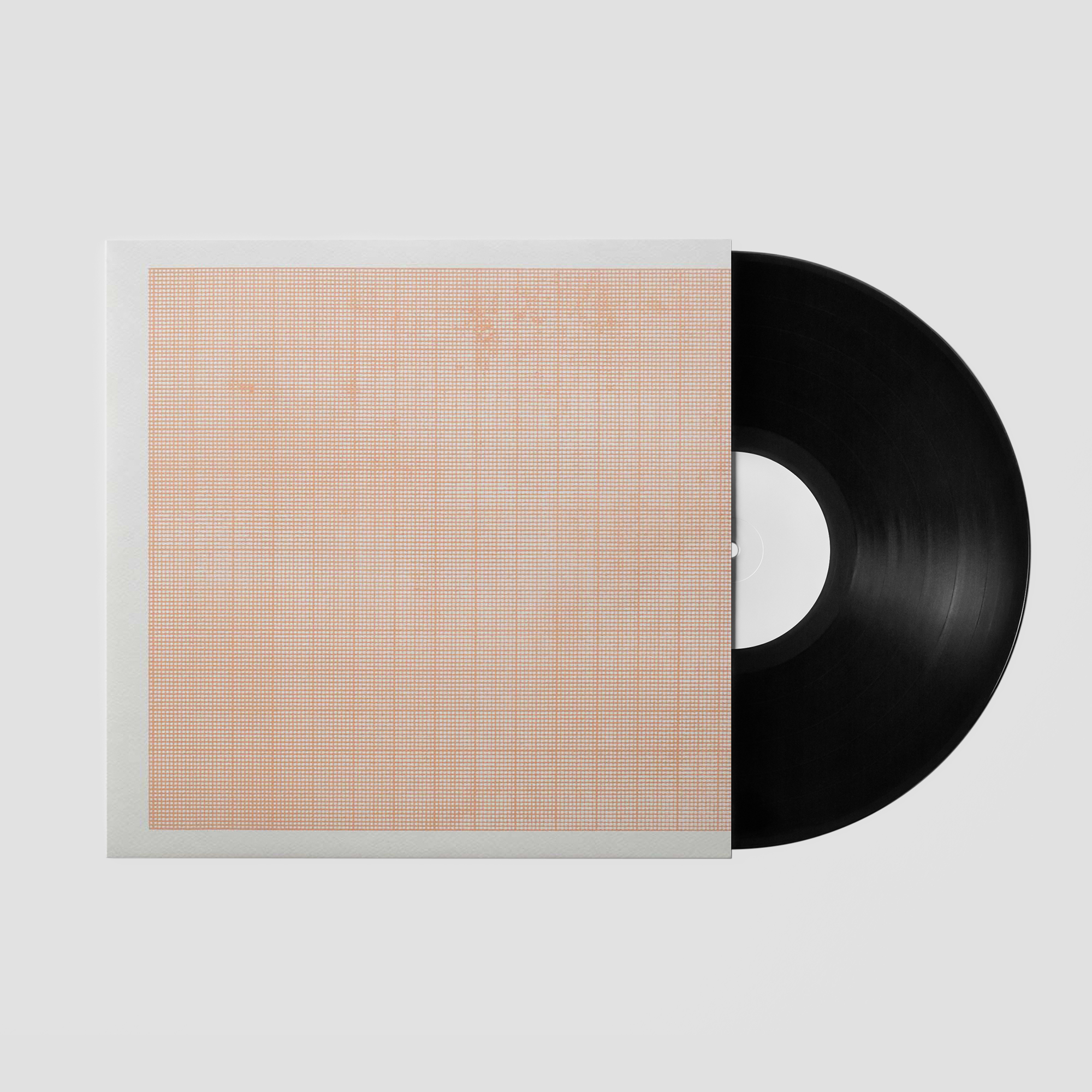 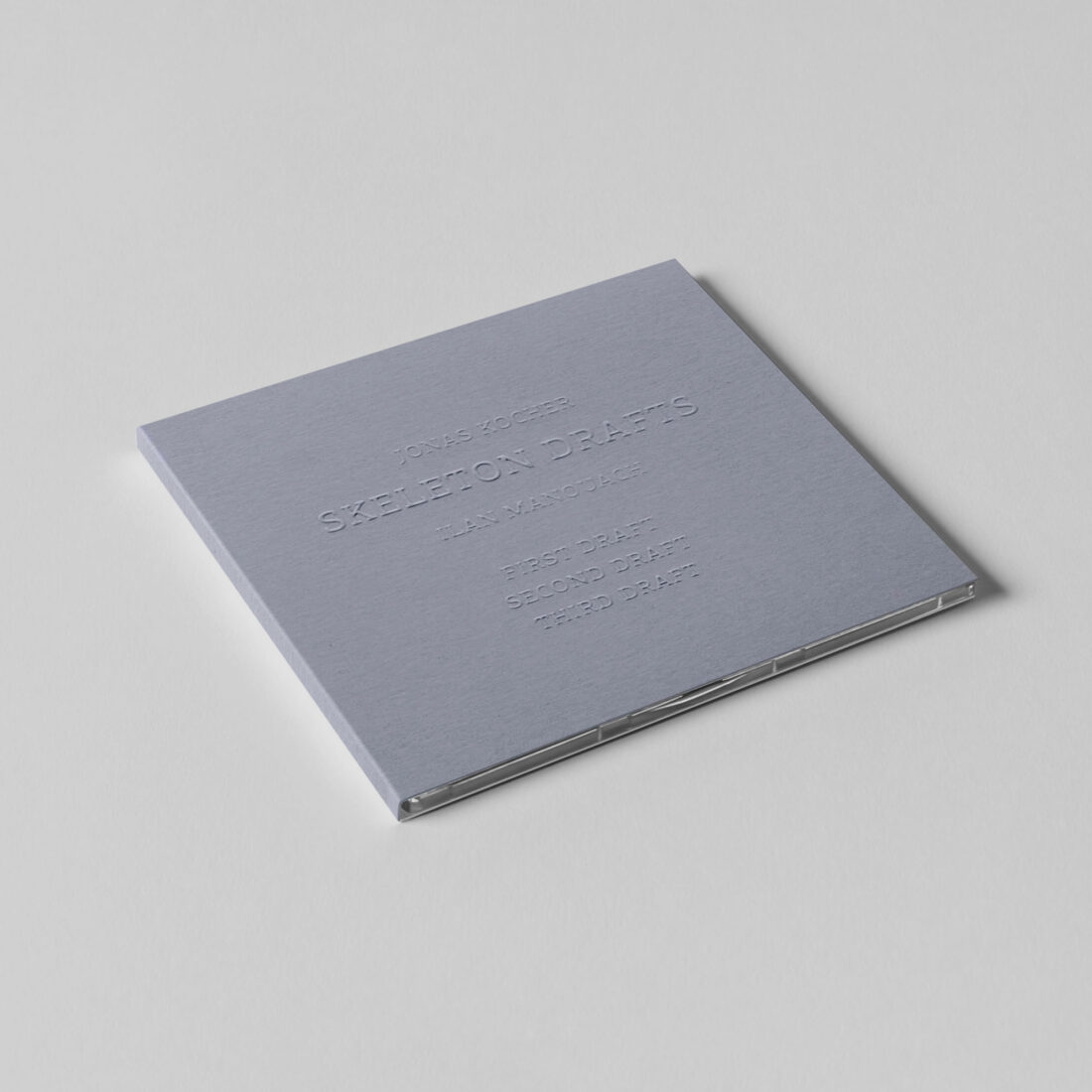 Skeleton Drafts is the first recorded work by accordionist Jonas Kocher who has regularly collaborated with the likes of Michel Doneda, d’incise, Alfredo Costa Monteiro and many others, and saxophonist Ilan Manouach who is one half of the noise/improv unit Balinese Beast and has also teamed up on many occasions with Agustí Fernández and Ivo Sans. Throughout the length of three tracks the two musicians propose a solid vocabulary of sounds while heavily relying on their own distinctive personal glossary – which is however not necessarily used for the needs of a certain storytelling: Manouach’s short and swiftly repeated phrases, rigorous blows and plucking sounds revolve around static tones, tonal variations and incisive but subtle periodic moves by Kocher. Mediated by irregular passages of silence and idiosyncratic acoustics of the recording studio, the sounds recurrently convene in corresponding gestures even though they spring from unique trajectories. These variations in style, originating from a plexus of phonemes, allow some exceptional qualities to emanate from the recording, which ultimately resembles an evaluation of elastic collision of different manners and approaches, carefully carried out in order to present a truly fine aesthetic.

Recorded in November 2014 in Athens, Greece 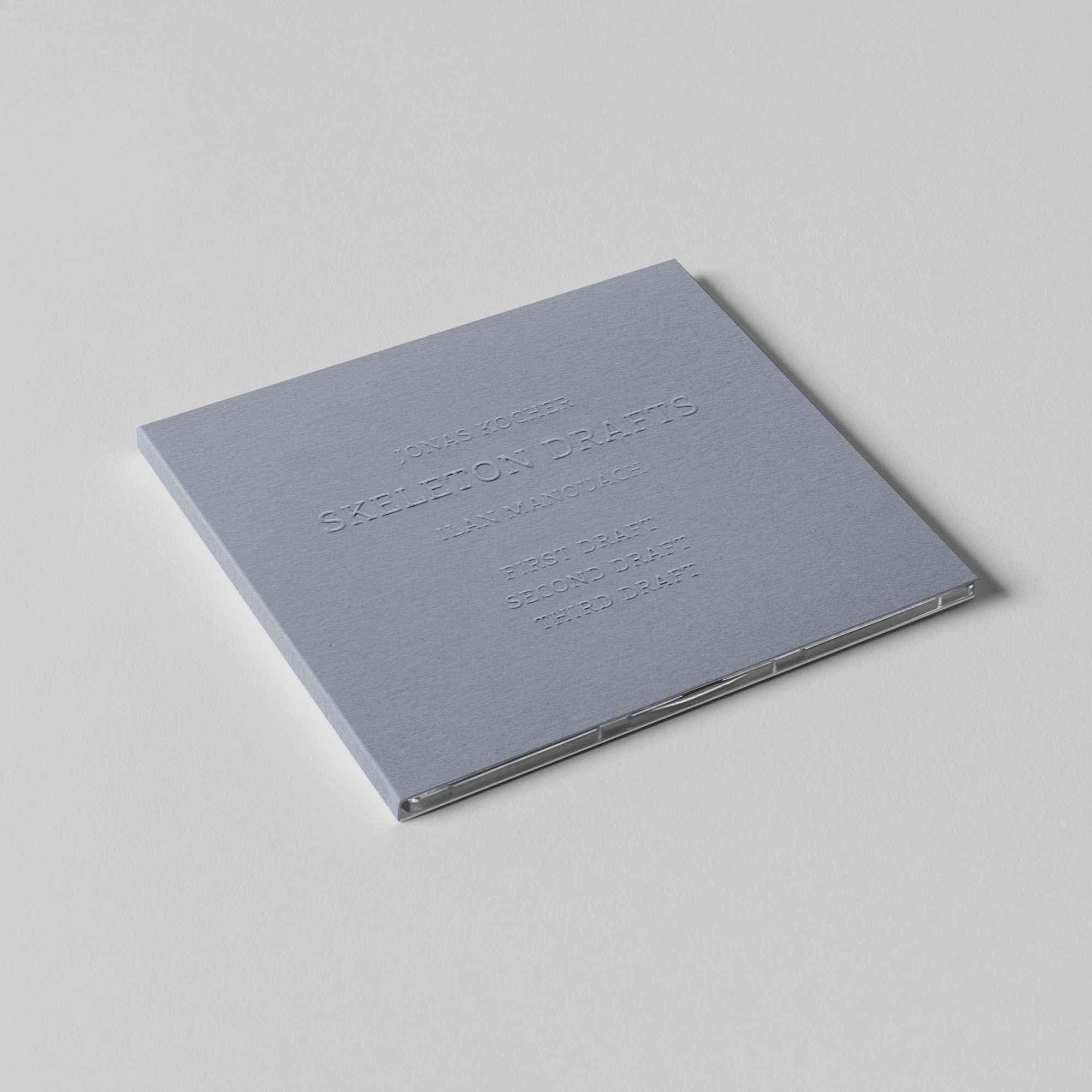 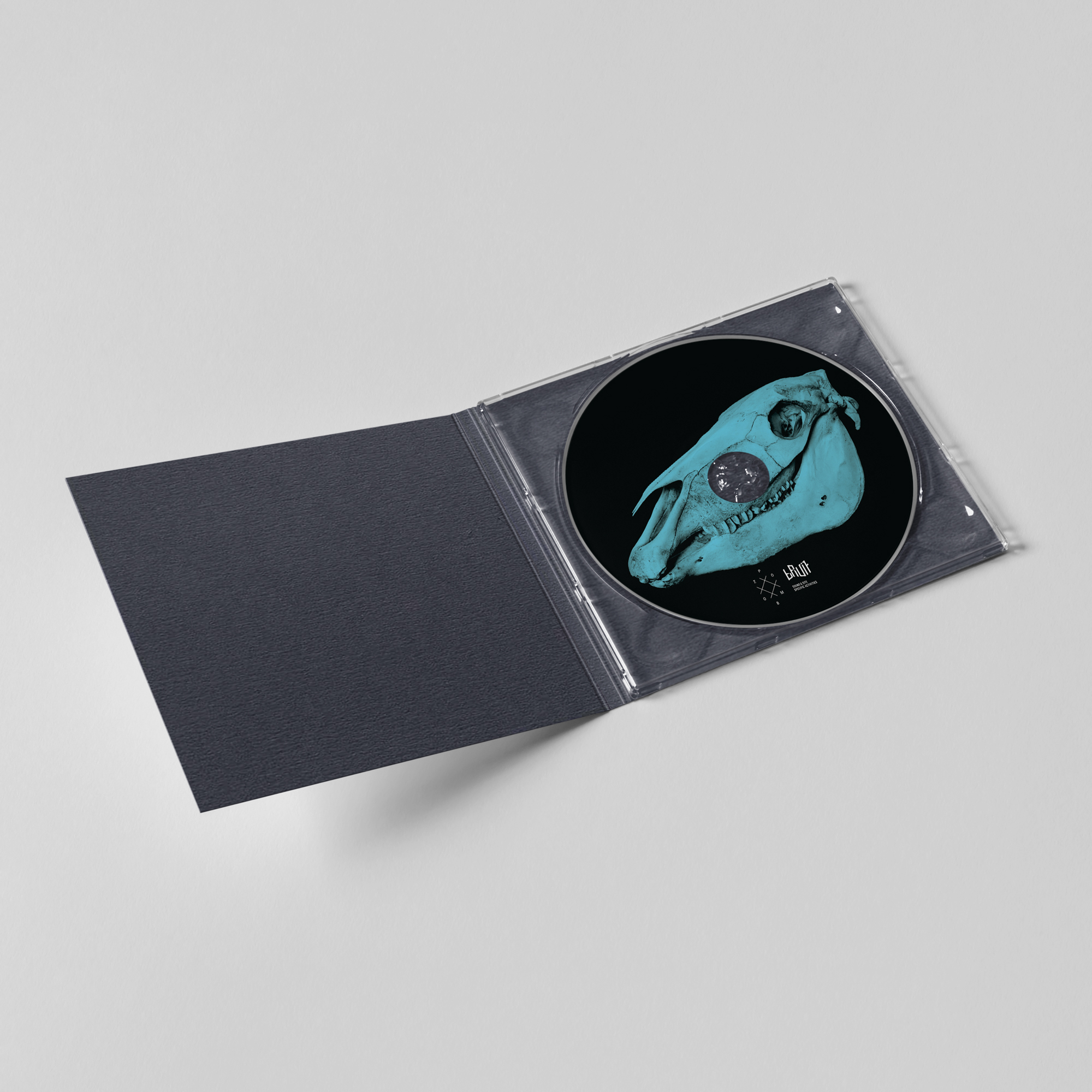